This is an image of Sinus Iridium, "Bay of Rainbows", on the northwestern rim of Mare Imbrium on our Moon.  The image was made from a video taken with a Philips ToUcam webcam on June 27, 2004 around 10 pm EDT.  The camera was coupled to a 10" f/6 Newtonian telescope with a Barlow lens (my Barlow Newtonian described on the Home Page) giving an effective focal ratio of f/18.5.  The video was turned into a still image using the program Registax which aligns all the frames in the video by shifting them to superimpose selected alignment features, then combining (adding together digitally) the best of the frames into a stack.  A digital technique called wavelet sharpening was then used within Registax to recover blurred details present in the image.  This technique of stacking and sharpening can to a large extent eliminate the distortions and blurring caused by turbulence in the atmosphere (bad seeing).  Note the wrinkle ridges highlighted by the low solar illumination angle.  The mouth of the "bay" is about 140 miles across from the upper right promontory named after the mathematician Laplace to the lower left one named after Hercules.  The small crater near the lower right edge of the picture is named Helicon and is about 15 miles across.  The dark triangle to the left of the Laplace Promontory is the shadow of the highlands there.  If Sinus Iridium were a real bay the highlands of the Laplace Promontory would be a very nice place to put a lighthouse!

This is an image of the crater Copernicus named after the astronomer Nicolaus Copernicus.  The crater is located at 9.7N 20.0 W in the eastern part of Oceanus Procellarum.  It has a diameter of 58 miles.  It is a relatively young feature on the moon's surface, being "only" 800 million years old.  Ejecta from the impact that gave rise to the crater form rays that may be seen nearly 500 miles from the crater.  Some of this debris can be seen in the lumpy appearance of the raised area arount the crater.  This image is based upon a video taken with the ToUcam attached to my 10" Newtonian on June 27, 2004 and processed as described above.

The annotated image below is of the northern region of Mare Imbrium including the crater Plato and the Alpine Valley.  It is a mosaic of several registax processed 30 second videos taken on May 27, 2004 with a ToUcam Pro webcam at the f/18.5 focus of the 10" Newtonian.

Above is a plot of the apparent path of Mars in the sky during the period between June 2 and November 1, 2003 when it is going through what is called its retrograde loop.  Mars appears to travel from west to east against the background of stars, slow down and reverse direction during the time of closest approach to the earth and then reverse direction again and contine travelling eastward.  The motion is a simple consequence of the geometry of the orbits of Earth and Mars and their relative orbital velocities, but probably was one of the reasons the ancient astronomers came up with their ideas about epicycles.  The image sizes are enlarged relative to the scale of the plot, but are correct relative to one another.  The images were all taken with a ToUcam Pro webcam coupled to my 10" f/6 Newtonian with Barlow lenses to give an effective focal ratio of f/46.5.  The videos were processed with Registax4 and  PhotoShop. Gaps in the sequence of images are a consequence of either the weather in New Jersey or other complications to my observing schedule.

The top panel shows a series of images taken around opposition time which was on August 27, 2003.  The apparent size of Mars varied from 23 seconds of arc on August 6 through a maximum of 25.1 seconds on August 28 and back down to 19.3 seconds on October 7.

The dark and light features seen on the disk of Mars are albedo features and have little to do with the surface topography on the planet.  They appear to represent places where lighter colored sand and dust is not covering darker underlying rock.

The image of Mars at the left was taken at 4:42 AM on July 25, 2003 with a ToUcam Pro webcam coupled to the 10" Newtonian with Barlow lenses giving an effective focal ratio of f/46.5.  The video was processed with Registax and PhotoShop as usual.  With the exception of Valis Marineris, the surface albedo features are given their pre-space age classical names.

The image of Mars at the right was taken at 2:25 am on August 6, 2003 with the ToUcam Pro webcam and the 10” Newtonian at f/46.5.  The bright feature, Hellas, is actually a deep basin, with the lowest altitude of any place on Mars.  It is presumably the result of a major asteroid strike.  It is very likely to contain extensive frozen water deposits partially covered with sand and dust.  The dark feature, Syrtis Major is in fact a highland region in contrast to the dark feature Mare Acidalium in the picture of July 25th which is actually on what would be an abyssal plain if Mars still had oceans.

The difference between the color of this image and the one above is not real.  Getting the right color is tricky with a webcam like the old ToUcam.  Not only do observing conditions (haze, light overcast, light pollution) affect the color, but getting a reproduceable white balance setting on the video capture software is hard to achieve.  It is easier if the moon is in the sky.  Adjusting the white balance so that the moon is a neutral gray is a good trick to use.

Below is a gallery of representative images from all the good nights around the time of Mars' closest approach to the earth.  Just click on the first image to see a slide show of all of the images at larger scale.  All of the images were taken with the ToUcam on the 10" Newtonian and processed with Registax4 and Photoshop.

Imaging Jupiter with the 10" Barlow Newtonian

March 13, 2004.  Tonight I recorded an interesting phenomenon, the transit of Ganymede and its shadow across the face of Jupiter.  There was also an ingress of Europa into the shadow of jupiter at 9:03 pm EDT.  The transit and eclipse of Jupiter by Ganymede was already in progress when I started imaging at 8:16 pm EDT.  In the first picture below, the shadow of Ganymede is the dark spot left of center and just above the north edge of the North Equatorial Belt (NEB).  Ganymede itself is visible as the slightly smaller dark spot right of center and over the white space of the North Temperate Zone (NTZ).  As the evening progresses, they both move to the east (right) across the face of Jupiter until Ganymede itself moves off the planet and becomes brightly visible against the black of space.  This occurred between the images taken at 9:03 and 9:30 pm EDT.  The exact moment of egress was 9:26 pm.  Note that the transit of a satellites shadow on the face of its planet is actually an eclipse of the sun by the satellite.  This eclipse was still in progress when I stopped imaging at 9:45 because of increasing overcast.  Seeing was quite steady, perhaps 8 on the Pickering scale, but the transparency was poor with considerable haze.

Lunar Imaging with the 12.5" Newtonian

This is a mosaic of several images taken on January 22, 2005 using the ToUcam Pro webcam coupled to the 12.5" f/6 Newtonian with a 5x microscope objective to give f/37 and a highly magnified image.  The location of the lunar south pole is indicated by a red line, as is the crater Cabeus made famous by the impact in October 9, 2009 of the LCROSS spacecraft looking for evidence of ice in the permanently shadowed floors of polar craters.

Whole moon images from mosaics of smaller ones

The small CCD of the webcam, only 3.6 x 2.7 mm in size, cannot possibly yield images of the entire moon and still yield high resolution.  The solution is to take many videos covering the whole surface and to put together the images made from these videos into an overlapping mosaic.  One could make prints of each of the small images and cut and paste them together, however, this can be done much more easily using software like Photoshop or Photoshop Elements.  I assembled a complete image of a crescent moon from a set of 65 thirty second videos taken with the ToUcam at the f/18.5 focus of the 10" Newtonian.  The final image is the one fourth from the top of this page.  Stages in the assembly using Photoshop on a black bacground document are shown below:

The videos must all be taken within an hour or so on the same night because of the slowly changing appearance of the moon as it rotates and librates.  The same shutter speed and gain must be used in the video capture so that there are not contrast or brightness discontinuities where segments of the mosaic come together.  Also, the bright line which usually surrounds images created by stacking video frames in Registax needs to be trimmed off and sometimes a feathered edge helps minimize the transition between segments.

The mosaics in the photogallery below were created this way.  It's a lot of work, but rewarding when you get enough segments to cover the whole moon and don't end up with a black rectangle in the middle of an otherwise fine mosaic! 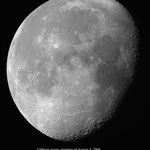 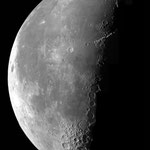 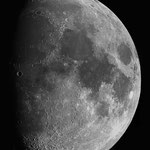